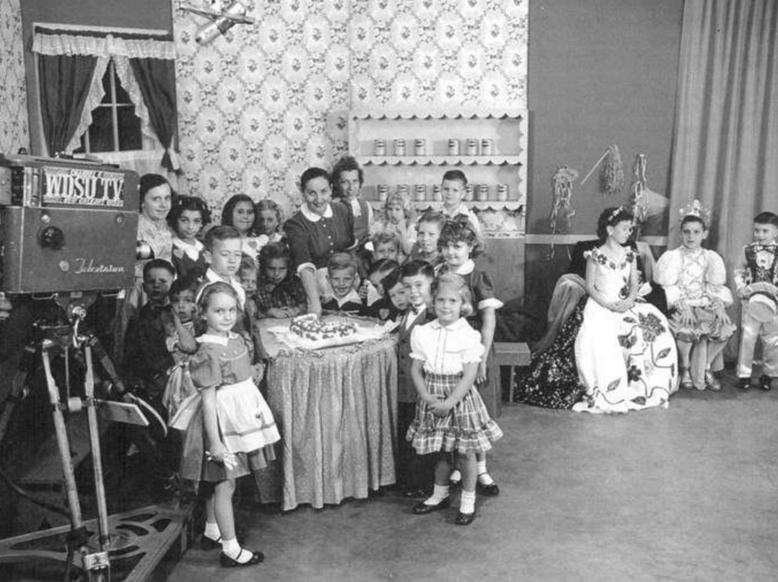 Terry Flettrich Rohe, the broadcasting pioneer fondly remembered as host and producer of the landmark news-talk program “Midday” and as children’s show host Mrs. Muffin at the dawn of the local TV era, died Thursday. She was 99.

Rohe, better known on air as Terry Flettrich, was literally one of the first women on local television, appearing in 15-minute test programs produced in the D.H. Holmes department store on Canal Street. That was even before the city’s first TV station, WDSU, signed on the air in December 1948.

“If anyone can properly be called the first lady of local TV it is Terry Flettrich,” said former WWL anchor and radio host Angela Hill.  “She was literally on the air here from day one and really went on to contribute some of local TV’s most magical moments.”

Like other broadcasting pioneers, Rohe moved quickly from assignment to assignment both behind the scenes and in front of the camera, as a writer, producer and host. Colleagues and longtime viewers said her blend of warmth, style and sophistication made her a natural star.

“Terry to me was the most cosmopolitan woman on TV, local or national,” said former Times-Picayune TV critic and feature writer David Cuthbert. “She knew so much, she’d been so many places and without throwing that around, she would tell you about it and what she knew became what you knew.”

Soon after Channel 6 began broadcasting, Rohe found success in a role that fans still remember her for six decades later, as children’s show host Mrs. Muffin. She hosted various incarnations of the WDSU program, which was one of the first local children’s shows, from 1950 to 1957.

About the same time, Rohe became an even bigger star as anchor and producer of “Midday,” the popular local news magazine program which ran from the 1950s through the 1970s. Rohe and her stable of “Midday” stars went on to become local TV icons: Wayne Mack, Nash Roberts, Al Shea, Iris Kelso, Alec Gifford, Ed Planer and the husband and wife team of Bob and Jan Carr. While all of them (and producer Ellen Hardeman) contributed segments, it was clearly Rohe’s production and she made it a very personal one.

“Terry was always filled with ideas. Her mind was constantly in motion, everything from art and music to international affairs,” said Bob Carr. “It made her exciting and interesting and she could talk to anybody who walked into a room or onto the set.”

In a 2003 interview for WYES-TV, Rohe herself described “Midday” as a television version of “Life” magazine.
“It was news, important people in the news and celebrities, with a strong emphasis on writers and a very strong emphasis on our city and our state because I fell in love with it and I still am,” Rohe said. Her personal touch helped build an even bigger audience.  A kinescope of the program shows her opening it simply by reading from a magazine article about a topic that interested her.

“’Midday’ was the first local magazine show tailored after the ‘Today’ show,” said Jan Carr, who joined the program with her husband Bob in the mid-1960s. “It was that same format, with the news and weather and then topics geared to New Orleans. Terry was very much the star and all of us who worked with her really became like a family.”

Like the Carrs, Rohe’s local broadcasting career began on radio, as a writer and performer on WWL-AM. She joined the radio station’s staff in 1942, and later went to work for WDSU-AM. At both stations she wrote for many different productions, including soap operas, commercials, a children’s show (“Buddy’s Book Corner” which featured a young Al Shea and Linda Mintz in its cast) and a home hints show. She even appeared as “Helen Holmes” in programs sponsored by D.H. Holmes.

Rohe’s life before New Orleans had all the makings of a radio drama. Born Aug. 30, 1917 in Omsk, Siberia, her father was a research chemist and her mother, a dentist. She grew up in Shanghai, China and after finishing three years of pre-med, came to the United States as an exchange student from the University of Shanghai. After earning degrees from Linfield College in Oregon and Columbia University in New York, she worked as an advertising copy writer in New York.

A love for jazz led her to New Orleans in the 1940s. She found an apartment in the St. Peter Street building that would later become Preservation Hall, which she often later frequented. She married artist and painter Leonard Flettrich, a New Orleans native. The two were the quintessential bohemian couple, working and living in a city teeming with creativity.

In the late 1940s, as television entered the picture, her WDSU bosses persuaded Rohe, who had made a name for herself on radio, to try her hand at producing for the new medium. In a 2003 WYES-TV interview, she recounted an early conversation with management. “I said I’d never seen television and he said, ‘Oh, there’s nothing to it,’” she recalled. “I asked if I could at least take some time off and go to wherever they had it. He said there wasn’t time. ‘You just put the programs together. Don’t you know television is just radio with pictures?’ I’ve never forgotten those magic words! Sometimes that’s all it is,” she said.

Soon after WDSU-TV signed on, Rohe and producer Suzi Fontaine created the afternoon children’s show “Mrs. Muffin,” which aired weekly on WDSU. “It started once a week as ‘Mrs. Muffin’s Birthday Party,’ then it became ‘Surprise Party’ and then we did a Saturday morning program, ‘Mrs. Muffin’s Magic Cottage.’ It just kind of grew and grew,” Rohe said.

Children would write letters to Mrs. Muffin, asking her to celebrate their birthdays on her program. Rohe remembered that each show, which taught positive life lessons as well as entertaining the younger set, ended with the children singing "Happy Birthday.” Then, all the young in-studio guests would enjoy cake and cookies. For decades after, Rohe (who revived the character in recent years making appearances as “Granny” and “Great-Granny” Muffin) said she would run into people all over the country who would recognize her as Mrs. Muffin and share their memories of either sitting on her lap in the studio or writing in to ask her to celebrate their birthday.

One of Rohe’s other early duties included writing material for the “Midday” show’s predecessor, “Our House.” When that program’s host, Vera Massey, left rather suddenly, station management asked Rohe to step in, but only temporarily.

“So I did and there was a ratings period and it went sky high. So I was stuck,” she recalled in a 2003 interview.  Rohe also said that one of the joys of her job at the time was the very fact that she and her colleagues were creating programs as they went along, since the medium was so new.

“I think that was the most exciting thing about it, because we didn’t know what it was so we really had to crawl into whatever ingenuity, intuitiveness, imagination, or whatever we had and so we did our damnedest. And I guess it wasn’t too bad because as I think about what we did, some of it is about as good as it gets,” she said.

While raising her family, which included two daughters and a son, Rohe lived for many years in Faubourg Marigny at what became known as The House in the Bend of Bourbon Street, just off of Esplanade Avenue. In the 1960s, she wrote a children’s book about the home (featuring illustrations by her daughter Lo-An). A musical adaptation was performed by the New Orleans Philharmonic Symphony in the late 1960s, written and performed by her future husband, bassist Bob Rohe.

Rohe’s influence extended beyond broadcasting. In the 1970s, she turned her friend Ella Brennan onto the idea of pursuing Paul Prudhomme as a chef for Commander’s Palace. Rohe and Prudhomme became friends through TV appearances and had tried to start a cooking school together. When that idea didn’t advance, Rohe suggested her friend Brennan hire the young chef, who went on to make culinary history. A food lover herself, Rohe also wrote several cookbooks.

Rohe left WDSU after new owners purchased the station from the Stern family in 1972. That, combined with the 1970 death of her husband Lenny, who had become a noted artist, prompted her to leave New Orleans for the northeast. There she and other former New Orleanians (including dancer and dance teacher Teresa Torkanowsky) purchased and ran a country inn and restaurant. Later, she rekindled a relationship with classical musician and composer Bob Rohe. The two married and lived in Hancock, Maine for nearly four decades before returning to New Orleans in 2013. Bob Rohe died a short time later.

Though she did slow down a bit after moving to Maine, retirement was not in the cards. In the 1980s, Rohe produced features for TV stations in Boston and New York (including at WPIX, where she reunited with former WDSU news director John Corporon, who remained a longtime friend). In 1986, Rohe landed a reporting job with “Good Morning America,” where she brought her experiences to a new role as a network correspondent. She traveled across the country to report on issues of interest to older Americans. Besides profiling seniors, she also did stories about bridging the generation gap.

"I feel I have a mandate to do pieces that are not merely the upside or downside of aging," she said in a 1989 article in the Atlanta Journal-Constitution. "I think it has to be hands across the generations. I'm trying to do more things about reaching across generations.”

She is preceded in death by her son, Lorenz "Rennie" Flettrich, who died in 1992. Survivors include two daughters, Patty Pulitzer of Walker, La. and Lo-An Flettrich of New York; three grandchildren, Lisa Pulitzer Zoller and Alexa Pulitzer of New Orleans and Dr. Samuel Pulitzer of Kingsport, Tennessee; and six great-grandchildren.