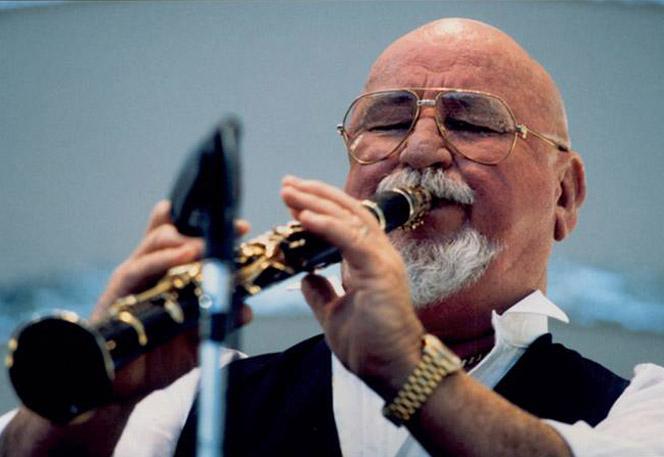 Pete Fountain, the iconic traditional jazz clarinetist whose sweet sound and merry spirit personified New Orleans for millions of fans, died early Saturday after a decade of declining health. He was 86.

For more than half a century, Fountain loomed large over the city's cultural landscape, from music to Mardi Gras to Bourbon Street.

His lush, swinging clarinet tone instantly evoked his hometown. His recordings of “Just a Closer Walk With Thee” and “Basin Street Blues” are widely considered to be among the quintessential versions. At least three of his dozens of albums sold more than a half-million copies apiece.

He represented Dixieland jazz on an international stage, thanks in part to a high-profile role on “The Lawrence Welk Show” and 59 appearances on “The Tonight Show” during the Johnny Carson era. He performed for four presidents and a pope.

Despite his fame, his fondness for fun never waned. An abundance of self-deprecating one-liners and wisecracks -- “My wife should have left me on the honeymoon” was a favorite, as was “I used to be taller” -- were part of his irrepressible character.

Along the way, he hung out with everyone from Louis Armstrong to Dolly Parton to Hank Williams Jr. In general, he lived life large as Mr. New Orleans, the unofficial ambassador of good-time New Orleans jazz.

"It snuck up on me," Fountain once said of fame. "I didn't look for it. I never did strive for anything. Through the years I just wanted to play. I enjoy playing. When you enjoy playing, and your clarinet is singing, it's stealing. You feel like, 'They give me money to do this?'

"But some nights when it's not working, you say, 'Boy, I wish I had taken over my daddy's beer route.' "

“His body gave out on him, but music was still in him," Harrell said. Even as he napped during his final days in hospice, his fingers and feet still moved with deliberate purpose. "You could see he was hitting notes with his fingers, and his foot was keeping time,” Harrell said.

"It’s a sad day for his family, and it’s sad too for all of New Orleans. Pete and his clarinet brought a lot of love and music to the world. He will greatly be missed."

Growing up as the son of a Dixie beer truck driver, Pierre Dewey LaFontaine Jr. first took up the clarinet to strengthen his weak lungs. At Warren Easton High School, he joined the marching band.

He idolized the great Benny Goodman and listened to New Orleans clarinetists Irving Fazola and George Lewis. As a teenage clarinetist, Fountain sought to combine the fat, bluesy tone of Fazola with Goodman’s drive, swing and technique.

By 15, he had already turned pro, working several nights a week on Bourbon Street. He quit Warren Easton during his senior year – he kept falling asleep in class, and his $150 weekly income already exceeded his teachers' salary – to play music full time. Many years later, Warren Easton awarded him an honorary diploma.

As a member of the Basin Street Six, his reputation as an especially hot clarinetist grew. In 1957, celebrity bandleader Lawrence Welk offered Fountain a spot in his big band. So Fountain packed up his family and moved to Los Angeles.

Every Saturday night, ABC-TV beamed “The Lawrence Welk Show” in black-and-white to millions of living rooms. As a featured soloist, Fountain was soon one of the most famous jazz musicians in the country. Initially, he sported a receding hairline, a prominent chinstrap of a goatee and thick-framed glasses. Welk’s people convinced him to don a toupee, ditch the glasses and moderate the goatee.

The straitlaced Welk didn’t much care for Fountain’s drinking but couldn’t deny the mischievous young clarinetist’s talent. Even while suffering a hangover, Fountain proudly noted years later, he rose to the challenge whenever Welk called for a solo.

"He kept me sober -- damn near killed me," Fountain joked. "Every time they make rules to a guy from New Orleans, he'll break it. Instead of going to the bar and just getting a drink, I'd get a double."

Musical differences and homesickness led to Fountain leaving Welk’s employment and moving back to New Orleans in 1959. The following year, he released “Pete Fountain’s New Orleans,” the gold standard for Dixieland jazz albums.

Trumpeter Al Hirt, a friend who, like Fountain, briefly worked as an exterminator to make ends meet, had his own joint a few doors down. Together, Fountain and Hirt were the faces of Bourbon Street jazz in its heyday.

Fountain loved the action. “I went to McDonogh 28 (grade school), Warren Easton and the conservatory of Bourbon Street,” he said.

By his own admission, the raising of his three children was left largely to his wife, Beverly, whom he married in 1951. He spent many weekends recovering from the “Jack Daniels flu” or the “vodka flu.” Such were the hazards of the conservatory of Bourbon Street.

Fountain appeared at the 1969 event that was a precursor to the New Orleans Jazz and Heritage Festival. At the first official Jazz Fest, in 1970, he headlined a nighttime concert aboard a riverboat. He rarely missed a Jazz Fest for the next 40 years, even as he flew off to lucrative corporate gigs around the country.

His albums routinely sold more than 100,000 copies. Never an astute businessman, he made and lost multiple fortunes. Failed ventures included a hot dog restaurant in Mississippi dubbed Peter's Wieners. Undaunted, he moved on.

For 26 years, it was Fountain’s clubhouse. Stars such as Bob Hope, comedian Don Rickles and “Tonight Show” bandleader Doc Severinsen stopped by to join in the fun. At the start of every show, the gold curtain parted as the emcee called out, “Ladies and gentlemen, will you please welcome Mr. New Orleans, Pete Fountain!”

The good times were not confined to his club. Inspired by the Jefferson City Buzzards and other old-line Mardi Gras marching organizations, Fountain and some friends founded the Half-Fast Walking Club in 1960. It was Beverly who suggested the name, which clearly mandated “walking,” not “marching.”

“We can’t march,” Fountain once said. “If we marched, we’d die. We’d last about four blocks.”

Setting out from Commander’s Palace at 7 a.m. on Mardi Gras morning, Fountain would “toot and scoot” with his band of merry men decked out in matching themed customs – pirates, Vikings, Romans, Egyptians, etc. One year, Fountain was a prince and his men were frogs. Another time, he sported a tutu.

Bound for the French Quarter ahead of the Zulu parade, they made numerous stops for “refreshments.” Along the way they dispensed paper flowers, kisses and jazz to those who arrived early on the St. Charles Avenue parade route.

When Pope John Paul II celebrated Mass for a huge crowd on the New Orleans lakefront in 1987, Fountain serenaded him with "Just a Closer Walk With Thee." He considered playing for the pope a highlight of a career that included multiple White House performances and two Super Bowl halftime shows.

His gradual withdrawal from the spotlight was as graceful as his clarinet.

With his lease at the Hilton set to expire in 2003, he decided to close his nightclub. He was ready to be rid of the pressures and responsibilities of running his own club; his core audience, too, was aging and not as inclined to spend nights on the town. For his final performance at the Hilton, he shared the stage with a handful of guests and old friends, including Orleans Parish coroner and trumpeter Frank Minyard.

Still wanting to play, he booked himself a couple of nights a month at a casino near his three-story, 10,000-square-foot vacation home on the waterfront in Bay St. Louis, Mississippi.

That home is where he and Beverly intended to ride out Hurricane Katrina. At the last minute, they evacuated to an inland motel in Mississippi. The decision saved their lives: Their beloved estate on the bay was obliterated by storm surge, washed away with a career's worth of memorabilia inside.

The couple eventually returned to their longtime residence in New Orleans' Lake Vista neighborhood, near Lake Pontchartrain. It suffered roof damage but did not flood in the storm.

Following Katrina, Fountain's health took a turn for the worse. Emergency bypass surgery in 2006 caused him to miss the Half-Fast Walking Club's annual Mardi Gras ramble for the first time in 45 years, much to his dismay.

He rallied to perform at the 2006 Jazz Fest, the first one after Katrina, with his cardiologist in attendance -- just in case.

Months later, two strokes, one minor, one more serious, made speaking difficult for him. But he could still make his clarinet sing: He was the featured attraction at the 2008 French Quarter Festival.

He was hospitalized with pneumonia in early 2013. He did not feel well enough to sit in with cornetist Connie Jones, a veteran of Fountain's bands of the 1960s and '70s, at that spring's French Quarter Festival.

He had always said that, when he could no longer “toot” to his own satisfaction, he’d hang up his horn. His farewell public performance turned out to be in the Economy Hall Tent at the 2013 New Orleans Jazz Fest.

He did not announce it as such, knowing the tent would be full regardless. The overflow crowd broke out in spontaneous second-lines and showered Fountain with adoration. Each time he raised the clarinet to his mouth, scores of cellphones snapped photographs.

The guests onstage included clarinetist Tim Laughlin, whom Fountain considered his protege, and his adult granddaughter Danielle Scheib, who strummed a washboard. A 7-year-old great-granddaughter, Isabella "Izzy" Harrell, sang "You Are My Sunshine." Afterward, a photographer caught Fountain wiping a tear from his eye.

A funeral Mass will be held on Aug. 17 at St. Louis Cathedral. Visitation starts at 9 a.m. at the cathedral. Following "words of remembrance" at 11:30 a.m., the Mass will start at noon. A second-line parade will follow the service. Lake Lawn Metairie Funeral Home is handling arrangements.