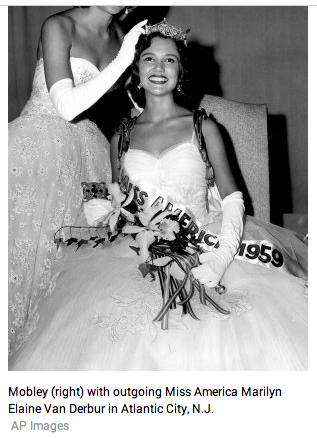 Mary Ann Mobley, the dark-haired and wholesome Miss America who went on to a successful acting career highlighted by two starring turns opposite Elvis Presley, has died. She was 77.

Mobley, who was married to the late actor and TV host Gary Collins, died Tuesday morning in her Beverly Hills home after a battle with breast cancer, execs with Warner Bros. Television said. One of her daughters,Clancy Collins White, is senior vp drama development at the company. 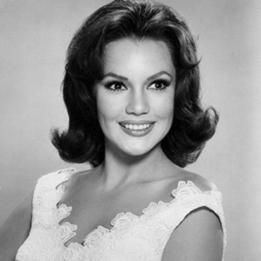 A native of Brandon, Miss., who attended the University of Mississippi, the vivacious Mobley was crowned Miss America 1959 and studied acting with Lee Strasberg. She appeared on Broadway in a 1962 production of the musical Nowhere to Go But Up, directed by Sidney Lumet, appeared in an L.A. production of Guys and Dolls and signed a five-year contract with MGM.

She first attracted attention on the small screen when she appeared on a 1963 episode ofAaron Spelling’s Burke’s Law, which producers loved to populate with beautiful women making a fuss over suave star Gene Barry.

In 1965, the Golden Globes named her Most Promising Newcomer, an award Mobley shared with Mia Farrow and Celia Milius.

After her character dated Presley’s in Girl Happy (1965), she reteamed with her fellow Mississippian later in the year in Harum Scarum, in which she starred as a slave girl who is actually the daughter of a king in the Middle East.

She was reportedly the first choice to play Batgirl in the 1960s Batman spinoff, a role that went to Yvonne Craig.

Mobley was among the few Miss America winners to forge a career in show business; the list also includes Lee Meriwether, Phyllis George, Bess Myerson and Vanessa Williams. (When she won, the second runner-up was Miss Oklahoma, Anita Bryant.)

Mobley replaced Dixie Carter as Maggie McKinney, who goes on to marry Conrad Bain’s character, for the final season of the NBC-ABC series Diff’rent Strokes in 1985-86.

Mobley also appeared on such shows as Perry Mason, Love, American Style, Fantasy Island,Ironside, Falcon Crest, The Partridge Family and Vega$ and was a recurring celebrity panelist on the game show Match Game.

She and Collins were active volunteers and fiercely committed to numerous worthwhile causes, traveling to Cambodia, Ethiopia, Mozambique, Somalia, Kenya, Zimbabwe and the Sudan for documentaries meant to show the plight of homeless and starving children.

In recent years, Mobley completed a three-season run at the Annenberg Theater in Palm Springs in a new musical titled Senior Class and debuted a cabaret act.

“The University of Mississippi family is saddened by the passing of Mary Ann Mobley Collins,” said a statement released by Ole Miss. She was the first woman to be voted into the university's Alumni Hall of Fame, a group that included her friend from her years at the school,William Faulkner.

Mobley wed Collins in 1967 (it was his second marriage) after they were introduced on the set of Three on a Couch. He died in 2012.

In addition to her daughter Clancy (and her husband William), survivors include another daughter, Melissa; son Guy (and his wife, Michelle); sister Sandra; and grandsons Garrett andGaston.

Services will be held Monday at Christ United Methodist Church in Jackson, Miss., with burial at Parkway Funeral Home.