Larry McKinley, the co-founder of Minit Records and the latter-day voice of the New Orleans Jazz and Heritage Festival, died Sunday of complications from chronic obstructive pulmonary disease. He was 85.

Mr. McKinley worked at local radio station WMRY-FM – it later became WYLD-AM -- in various capacities throughout the 1950s. As an influential disc jockey, he helped launch scores of hit records, including Ray Charles’ “What’d I Say.”

They hired a young piano player and songwriter named Allen Toussaint as the label’s in-house producer and arranger. With Toussaint directing recording sessions and, in many cases, writing the songs, Minit would release a string of classic singles. They included K-Doe’s signature 1961 smash “Mother-in-Law,” which hit No. 1 on the national charts. Other New Orleans artists on the Minit roster included Irma Thomas (“Ruler of My Heart,” “It’s Raining”); Benny Spellman (“Lipstick Traces,” “Fortune Teller”); Jessie Hill (“Ooh Poo Pah Doo”), and Chris Kenner (“I Like It Like That”).

Years later, Mr. McKinley joined the governing board of the New Orleans Jazz & Heritage Foundation, the nonprofit that owned and oversaw the fledgling festival. After leaving the board, he helped to market and promote the festival. Jazz Fest grew from a small, mostly local event to one with an international audience that is a major force in the city’s cultural economy.

Virtually every single one of the hundreds of thousands of Jazz Fest attendees each year hears Mr. McKinley’s recorded voice projecting from the converted ice chest speakers stationed at the Fair Grounds entrances. In a pleasant yet authoritative baritone, he welcomes attendees, lists prohibited items, runs down other rules and regulations, and provides directions.

In a 2008 interview with The Times-Picayune’s Dave Walker, Mr. McKinley described how his voice was often recognized by Jazz Fest attendees around the country.

“One time I was in Philadelphia at the airport," McKinley recalled. “I was waiting for a plane, and at one of the kiosks I made an order. And so a young lady was standing right behind me. Had a Penn State sweatshirt on. And when I placed my order, she looked at me and said, 'Are you from New Orleans?’

“She says, ‘The Jazz Fest? I recognize that voice.’"

Mr. McKinley lost most of his memorabilia from his long career when the levee breaches during Hurricane Katrina flooded his home in the Pontchartrain Park neighborhood.

He received OffBeat magazine’s Best of the Beat Music Business Award in 2005, and was inducted into the Louisiana Music Hall of Fame in 2010. 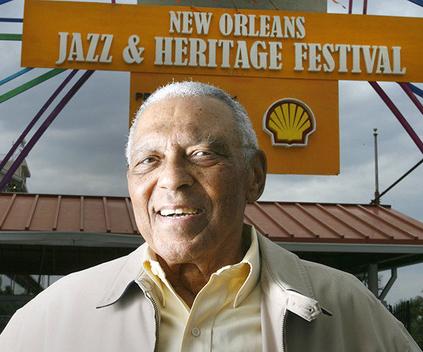