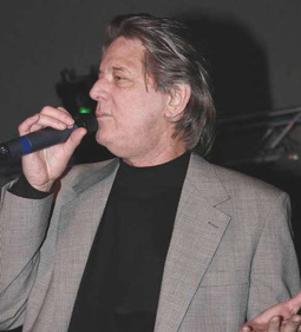 He had been hospitalized for an extended period of time at Tulane University Hospital in New Orleans due to complications following surgery. He was a native of Baton Rouge, attended Sacred Heart Academy, and graduated from Catholic High School, where he excelled at basketball and baseball.

As a high school junior, he recorded his first single, "Shirley." His song hit the national pop music charts, and led to appearances on "The Alan Freed Rock & Roll Show" in New York City, which jumpstarted a career in music that spanned more than 40 years.

After graduating with a degree in education from Southeastern Louisiana University, where he set basketball and baseball records that remained unbroken until recent years, John Fred and the Playboys gained widespread recognition in the southeastern United States as a premier show band. Several regional hits, such as "Boogie Children," which was frequently played by Wolfman Jack on his radio show, plus "Up & Down," "Agnes English" and "The Harlem Shuffle" kept John Fred and the Playboys in the forefront of the '60s music scene.

He was best known for his multi-million selling, No. 1 hit song, "Judy in Disguise (with Glasses)." The national and international breakthrough of "Judy in Disguise," recorded in 1967, led to appearances on "The Tonight Show with Johnny Carson" and Dick Clark's "American Bandstand."

He had great respect and admiration for the art of songwriting and record producing, and produced records for other artists, including Irma Thomas and Fats Domino. He wrote and produced radio commercials and jingles, twice winning the prestigious Clio Award. In 1992, he teamed up with long-time friends G.G. Shinn and Joe Stampley to record the critically acclaimed CD titled "The Louisiana Boys." The last two releases were "I Miss Ya'll," taken from unreleased masters, and "Somebody's Knockin;" however, they never were promoted.

In 2000, he was recognized by Catholic High School as a Grizzly Great in honor of his accomplishments as an athlete while attending Catholic High and for his volunteer efforts in the years following his graduation. He coached youth league baseball for 29 years and, beginning in 1995, became the volunteer head coach of Catholic High School's freshman baseball team. The life lessons taught by John Fred to scores of young men through his coaching left a lasting impression.

One of his proudest accomplishments combined his lifelong passion for music and sports when he wrote and recorded "Baseball At The Box" for the LSU baseball team, coached by his good friend, five-time national champion coach Skip Bertman. Bertman once said that John Fred sent him more great baseball players than anyone else.

​He was appointed by Gov. Kathleen Babineaux Blanco to serve on the Louisiana Music Commission. In 2001, he originated and hosted the popular local radio show "The Roots of Rock 'n' Roll" on WBRH-FM/KBRH-AM, a nonprofit radio station at Baton Rouge Magnet High School. He did this as a volunteer and enjoyed sharing his music and his experiences with his thousands of listeners.

The station will air an all-day tribute to John Fred on Saturday, April 23. John Fred's life and career touched untold thousands of lives in special ways. His hard work as an entertainer brought joy to an entire generation of young people in the 1950s, 1960s and 1970s and brought back memories of those special times in the 1980s and 1990s.