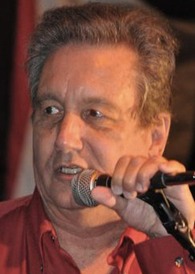 Legendary New Orleans disc jockey
Bob 'The Oldie King' Walker
is 'proud to have been a part of radio at its best
and glad to be leaving it at its worst.'

Now, after 38 years on the air here, most recently at WTIX-FM, "The Oldie King" has said, "It's quittin' time for me."

"I had a radio career full of incredible highs," said Walker. "WTIX-FM treated me well and I have the highest regard for them. At this stage there are other things and challenges I wish to experience and enjoy. There's a big world out there on the other side of radio. I want to soak up as much of it as I can."

But the 56-year-old DJ, who cut his teeth at the turntable of local radio icon Poppa Stoppa, will tell you he also left the airwaves partially because of his disgust with broadcast radio in general. It's what he calls "a wasteland of sterile music and endorsement whores" owned and overseen by bottom-line corporate radio people who couldn't care less about the betterment of music -- and have tight play lists of only 300-400 songs.

"An embarrassment," he calls it.

Behind a mike since 1965 -- most of it at WTIX AM-690 -- Walker has memories few in his profession have of the 'TIX glory days, lording over the pop-music airwaves with DJ pals "Skinny" Tommy Cheney, Todd Bauer and Kim Stephens. Those were the days of 'TIX Tenna-Toppers (orange Styrofoam balls that listeners put on their car antennas) and "Chime Time," which featured three different chimes recorded from the Fortier High School Band chime.

"He's a part of growing up in New Orleans for so many people," said Steve Slumber, who helped Walker host "Sunday Night Oldies Parties" at the Bengal Lounge in Metairie and other locations around town for 16 years. "We've been hearing that distinctive voice since 1967. He's like an old friend with a great voice and his love of oldies is unmatched. Bob really remembers the people who helped him along the way and is a great entertainer."

Slumber credits Walker with keeping the local talent such as Bobby Mitchell, Ernie K-Doe, Irma Thomas, Eddie Bo and countless others in the oldies spotlight while most other radio stations devote themselves exclusively to national recording artists.

"He helped keep their careers going in some years when they might not have been doing much," said Slumber.

"My goal always was the betterment of music," said Walker. "I never made a lot of money. I just wanted to see New Orleans music and oldies live on and make sure they got played.

It was an increasingly uphill battle. Back in 'TIX's heyday, stations encouraged DJs to style the shows to fit their personalities. It was, said Walker, "a time when you actually had a chance of hearing your song played if you called a request line. Now, if the song you want is not on their tight playlists of 300 to 400 titles, you will not hear it."

Even oldies formats have narrowed their focus, spotlighting only the biggest hits by certain artists and from particular eras. "Fats Domino had 50 or 60 hit songs. Why are they not being played?" Walker asked. "All you hear is 'Blue Monday,' 'Blueberry Hill' and 'I'm Walkin'.' "

Radio, he says, has been "neutered down to nothing." At many stations, from 7 p.m. to 6 a.m., local disc jockeys have been replaced by syndicated programming and pre-recorded voice tracks. "You're listening to computers because it cuts costs," Walker said. "But it sure takes the fun and spontaneity out of radio."

As for the "endorsement whores," Walker says those are the on-air voices who say, "I tried this product and it works for me." Most of them get talent fees for doing that, said Walker, adding that there should be a "paid advertisement" disclaimer for radio listeners just as there are for viewers on some TV commercials.

Many of these product endorsers, he said, "are promoting things they don't know anything about or haven't tried. Most of them are just reading a fact sheet, just putting it into their own words."

On-air personalities were held to a somewhat higher standard when Walker came out of Louisiana State University, where he worked at the campus radio station, and landed his first paying gig at WNNR AM-990, "Da Center Aisle on Your Radio Dial," broadcasting from the old Jung Hotel on Canal Street. It was there that he hooked up with Clarence Hamann, aka "Poppa Stoppa."

"The best, no doubt about it," Walker said. "He was the originator of the 30-minute and 40-minute music jam, non-stop commercial-free music."

Walker recalls how Hamann would leave the studio while the records were spinning, get in his car and drive through neighborhoods to see what radio stations people were tuned to. Naturally, if they weren't listening to his show, he let them know about it.

"He had a healthy disrespect for authority. They'd tell him what to do and he just laughed," said Walker. It was "Poppa Stoppa," he said, who first integrated black and white artists on local radio playlists. " 'TIX picked up on that," Walker said.
From 1979-84, Walker hosted the " 'TIX Original Oldie Hour" at noon. He brought out local oldie moldies that hadn't been heard in years and believes the show was directly responsible for the resurgence of local rock 'n' roll and R&B acts that hadn't been heard for some time.

It was about this time that Walker got reacquainted with his old high school buddy, the aforementioned Slumber, who had been hired by the original Bengal Lounge on Causeway to spin oldies on Thursday nights in 1980. At the time, Slumber and "Big Bill" Carlisle were just about the only people doing this DJ-at-a-lounge bit.

Walker invited Slumber to phone into Walker's show with oldies trivia and dubbed him the "Oldies Professor." Slumber invited him out to see his gig at the Bengal and before long, Walker and "Blair on the Air" were doing their own shows in front of packed houses on Fridays and Saturdays. That eventually evolved into Bob Walker's "Sunday Night Oldies Parties" live from the Bengal.

"They told us it wouldn't work but it did," said Walker. The original Bengal burned down, was rebuilt and through the years the show jumped around from lounge to lounge. Aaron Neville, Irma Thomas and Ernie K-Doe were among the stars who performed on the show, basically for free or a small fee. And despite the naysayers, it lasted from 1980 to 1996.

As you might expect from someone who has been on the air as long as he has, Walker has countless stories about on- and off-air hijinks. Like the time a prankster tried to play of prank on a fellow DJ by removing the "Out of Order" sign from the rest room, only to make an unintended victim of the studio guest: Mayor Moon Landrieu. Or the time a record company promotion man helped promote Ray Stevens' new song, "The Streak," by bringing a woman to the station who bared all while Mitchell was on the air.

Some of Walker's funniest memories stem from his on-air work with one of his favorite radio sidekicks, KQLD "Oldies 106.7" cut-up T-Ben Boudreaux, "the traffic dude in a traffic mood."

"One of the most talented entertainers I've ever met," Walker said. Boudreaux, wearing a coonskin cap, a shirt with sergeant's stripes and torn jeans, would yell about "geese from the East" and "wham-bam traffic jam."

He was probably "ahead of his time, or any time," said Walker. "We had a lot of laughs."

And that's one of the things Walker will take away from his years of radio -- laughs. That, and friends such as Cherie "Your Oldies Sweetheart" Vitrano and countless others, some of whom, such as Darlene Gentner, are no longer with us.

"During those 38 years, many friends were made and many good times were had. The memories will stay with me forever," he said.

"I was there when radio was truly local and a good business to be in," he said. "I was there at the beginning. Fats is 73 and Willie Nelson is 70. And I'm here at the end, alpha and omega. From the beginning of rock as a listener, till I got on the air, got to know these artists as celebrities and now we're riding it all out together.

"I am proud to have been a part of radio at its best and glad to be leaving it at its worst. In its heyday of the '60s and '70s, WTIX was one of the five strongest and most influential stations in the country. If we added a song to our playlist it would zoom up the national charts and be added by stations all over the country. If we came up with a catchy new slogan, you could hear stations everywhere using it shortly afterwards."

With Walker, there's always the chance that retirement will not be forever. He has left radio to pursue other business endeavors several times before. "But," he said, "like Michael Corleone said in 'Godfather 3,' 'Every time I'm out, they pull me back in.' "

For now, Walker says he plans to spend more time with his wife of 28 years, Judy. He has three grown children and is about to be a grandfather for the first time.

"You never know," he said. "If I could, I might want to go back and play what I want to play one more time -- like Smiley Lewis, or maybe Danny White and the Cavaliers singing, 'Kiss Tomorrow Goodbye.' "