Practically every New Orleanian of a certain age who grew up glued to his or her family's "new" TV set remembers "Mrs. Muffin." If you don't believe that, ask the woman who brought the kidvid star to life, local TV legend Terry Flettrich Rohe (who now lives in Maine), the reaction she gets, more than 50 years later, every time she returns to the Crescent City.

More often that not, a prominent local attorney, businessman or distinguished-looking grandfather will get that twinkle in his eye when he reminds Mrs. Rohe (and his accompanying children, grandchildren or colleagues) that he sat in her lap as a youngster, got a cookie with his name on it and made television history by taking part in the now legendary WDSU-TV children's program she hosted for almost a decade.

"Mrs. Muffin" came to life on WDSU-TV Channel 6 in February 1950 and ran there well into the 1950s. The program and its host were the brainchild of New Orleans radio/TV producer Suzi Fontaine and radio/TV personality Terry Flettrich Rohe.

Over the years, Mrs. Muffin's program had various time slots (from Tuesday and Thursday afternoons to Saturday mornings) and various incarnations on WDSU, from "Mrs. Muffin's Birthday Party" to her "Surprise Party," "Christmas Party" and her "Magic Cottage." Whatever the name, the premise and personality were the same.

In 1949, both Fontaine and Flettrich were producing programs for radio -- Fontaine for the old Maison Blanche department store, Flettrich for D.H. Holmes. Suzi Fontaine produced many pioneering children's shows for WDSU-TV (then broadcasting from the Hibernia Bank building).

As the two former French Quarter residents explain it, during a meeting at the old Bourbon House, they breathed life into their idea. She was to be a lively, lovable character named Mrs. Muffin, reflecting Terry Flettrich's love of cooking.

As the old New Orleans Item newspaper described their creation on her first anniversary in 1951: "She was Mrs. Muffin, who lived in an old-fashioned cottage and whose activities ranged from reading favorite fairy tales to showing children how to make puddings.

Once the show went on the air, children were invited to write in for a chance to visit Mrs. Muffin's cottage and appear on her program. Those who were lucky enough to be picked (usually up to 50 children each week), made the trip to the WDSU studios, were treated to a cookie with their name on it, received a free toy or game, enjoyed birthday cake, sang songs, listened to a fairy tale (her first was "The Gingerbread Boy"), learned arts and crafts, and of course received lessons about sharing, giving, good behavior and manners.

Some kids (who even went on to careers in Hollywood) broke into show business with a dance or a song for Mrs. Muffin and friends. For the kids watching at home, there was a lot to take in. The Item's 1951 story explains: "Each week youngsters visit the music room, the art gallery, or the theatre, as well as her kitchen for special entertainment."

Every child who wrote in received a signed photo postcard which read, "Little friend, thank you for your very nice letter. I enjoyed it so much, and I hope I'll be hearing from you again soon." The letter was signed simply, "With love, Mrs. Muffin."

Many of the show's original children (most now grandparents themselves) enjoyed one more Mrs. Muffin party with their own children and grandchildren.

It was an accurate reenactment of one of the first and best loved children's programs in local TV history. Terry included a display of some of the cards and letters local children wrote to Mrs. Muffin over 50 years ago, photos and memorabilia, and hosted a reception afterwards, as the children, adults and "Friends of Mrs. Muffin" reunited once again.

Thanks to WDSU-TV and Paul Yacich for the pictures and history of Mrs. Muffin, and to Dominic Massa for helping coordinate the reunion, which was videotaped for playback on TV. 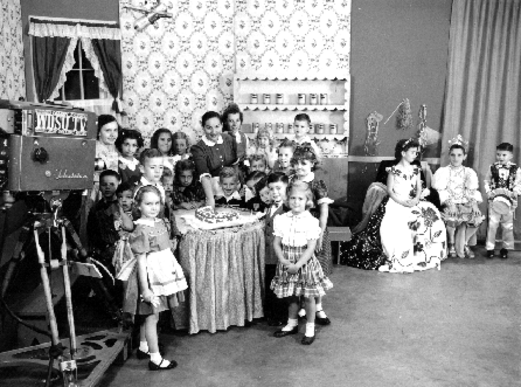 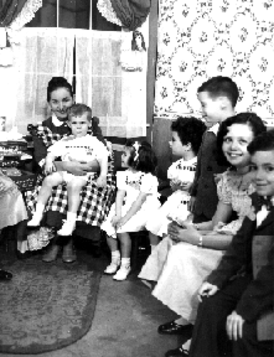